Am I A Candidate?

Rhinoplasty is usually recommended after the age of 18 because the nose should be fully developed. Certain breathing difficulties can be corrected that are related to the internal nasal structures. Other indications for rhinoplasty include: your nose appears too large or disproportionate for your face, there is a bump on the bridge of your nose on side profile, your nose appears too wide on front view, the tip of your nose droops, plunges or appears thickened or enlarged, your nostrils flare too much, or there is asymmetry (ie. your nose is crooked), sometimes after an injury.

How Is Surgery Performed? 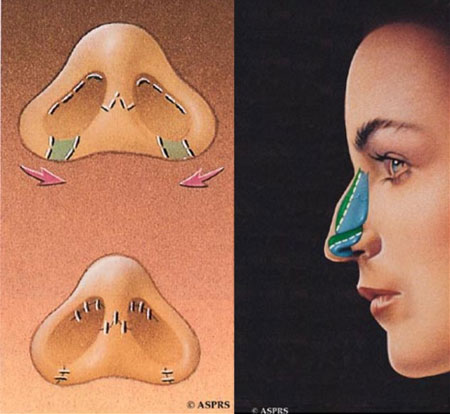 There are different techniques to alter the bridge or width of the nose, narrow the nostrils, change the relationship between the nose and the upper lip, or reshape the tip. The specific surgical maneuvers recommended and utilized will vary depending on individual factors and desires. The incisions are usually placed inside the nostrils where they are not visible. Tiny wedges of skin can be removed to narrow the base of the nose or to decrease the width of the nostrils. The incisions are hidden in the natural crease between the nostril and the cheek. Sometimes, a short incision is made across the column of skin that separates the nostrils. All of these incisions allow access to shape the underlying cartilage that forms the framework of the nose. Cartilage may be removed (green areas), pulled together, or straightened, depending on the correction. The position of certain bones at the roof of the nose can also be molded to make the nose appear narrower. The tip of the nose can also be narrowed or raised via a combination of cartilage removal and/or suturing techniques. Volume can be added to the scaffolding of the nose by adding grafts in the form of bone, cartilage, or silicone. The skin and soft tissues are then redraped over the new framework.

What Are The Risks?

Some of the potential complications that will be discussed with you during your consultation include bleeding, infection, and reactions to anesthesia. Any numbness is usually temporary. Additional surgery may also be necessary on occasion to correct any under or over corrections from the initial surgery. Risks can be minimized by following the advice and instructions that will be given to you before and after surgery.

What Can I Expect?

A splint is usually placed on the bridge of your nose after surgery for both protection and to hold the tissues in place until they are stable. Packing and soft internal nasal splints are also used sometimes if the septum (the cartilaginous middle divider of the nose) was moved into position. Packing is removed within 24 hours while the splints may stay on for a couple of weeks. Bruising around the eyes and cheeks is most apparent for a few days after surgery, but mostly gone by 1 to 2 weeks. The majority of the swelling resolves after several weeks, but there may be residual swelling for several months, especially at the tip. The goal of rhinoplasty is to ultimately achieve a natural appearing nose that blends in harmoniously with other features of your face.